You think it’d be easy to talk about a guy that you became great friends with 38 years ago. I mean, that’s enough time to think you know something about a guy.

But…when Mike McIntyre asked if I’d be willing to introduce him tonight - I realized it’s not as easy as I’d thought. What is it about something a guy did 4 decades ago…something he stood for then - and STILL stands for…that resonates to this day with the guys who were around him back then?

Mike was not a rah-rah leader - he led by doing. Now…that doesn’t mean he didn’t say anything - he was NOT afraid to let someone know when their effort was not where it should be: “We’re not playing touch!” “Don’t give it to the backs!”

But, the thing is…he COULD say those things to you - and it just made you try that much harder. Because not meeting his expectations was not acceptable to any of us.

I remember playing in a game against Auburn - AT Auburn - in the SEC Tournament. Some of the Auburn guys took some ill-advised liberties with our fly-half - Pat Shires - during a ruck.  And, I saw a blur out of the corner of my eye…as Mike sprinted into the group - and suddenly a couple War Damn Eagles were airborne. And, the rest of us knew - “Okay, that’s where the bar is set.”

On a team that was not exactly full of shrinking violets - Mike was the one that we fell in behind. Butch was our coach and the one who got us prepared…but Mike was the one we followed on the field. (And, for those who could keep up - off the field, as well.)

After his playing days at UT ended…Mike would end up playing several years at MTSU…and was part of the Moose Men 7s teams that made it to the Final 4 of the Cape Fear 7s tournament that featured the Duck Bros (with our own Danny Parris)…Charlotte Rugby Club…and the English Harlequins. That’s some pretty good company.

He then played in Nashville until 1991, when a broken leg and a spasm of good sense told him  to hang up his boots. His involvement with rugby didn’t end then, though. In fact, he helped coach several guys in attendance tonight - including Jonathan Brown…and fellow Captain’s Circle inductee, Kevin Hartley - during their days at Brentwood High School. Go Brumbies!

As I conclude my remarks…there was one other word that our group shared that sums up  Mike.  Friend.

When I had the crazy idea of documenting the history of this team…Mike was my first call. I trusted his instincts, and his reaction was the one I figured I could count on the most. We’ve had many conversations since…and one of the greatest gifts all of the guys from those early 80s teams took away from our days playing here - is that we can call him - friend.

With that, it’s my distinct honor to induct MY Captain…Mike McIntyre…into the University of Tennessee Rugby Captain’s Circle! 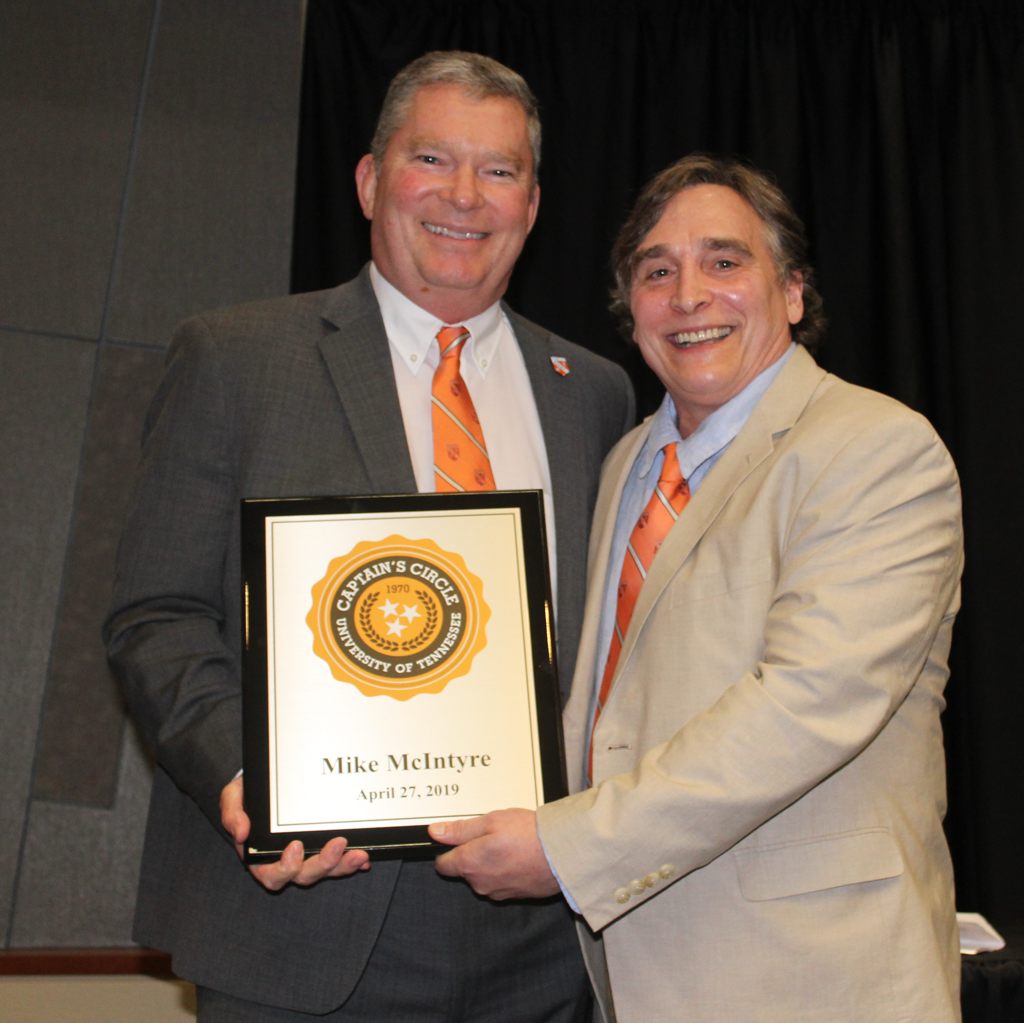